Nusrat Fateh Ali Khan was famous for Qawwali (Qawwali is the devotional music of sufi muslims expressing their love for God sung by a group).He was born in the city of Faisalabad in Pakistan on October 13, 1948.

USTAD NUSRAT FATEH ALI KHAN The meaning of "Fateh" in Punjabi language is "to Win or Conquer" and meaning of "Nusrat" in arabic is also "Victory". Nusrat Fateh Ali Khan also won the hearts of millions of million people with his Qawwalis and unique style of singing.He was the fifth child of Ustad Fateh Ali Khan. In his family they have four sisters and one younger brother they all are lived in central Lyallpur.The major occupation of his family is Qawwali which was started 600 years ago.Nusrat's father did not want his son to adopt the family business.He want Nusrat to select a more respectable career by becoming a doctor or an engineer,because at that times Qawwals are treated with low social status.However, Nusrat showed his interest in Qawwali that his father finally changed his mind and started to train him in the art.Then Nusrat started to play tabla, alongside his father and he learnt Raag Vidya and bolbandish. His father has died in 1964,after the death of his father his uncle Mubarak Ali Khan and Ustad Salamat Ali Khan provided the requisite training to him.He gave his first performance known as "Chehlum" after the forty days of his father's death.In 1971 he became a leader of his Qawwali party. As a leader of Qawwali party he gave his first public performance in Pakistan known as "Jashn-e-baharan " organised by Radio Pakistan. 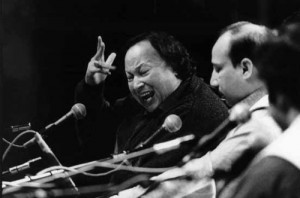 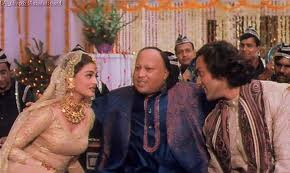 Nusrat Fateh Ali Khan mostly sang in Punjabi and Urdu and also in Brajbhasha, Hindi and Parsian (farsi). His best hit performance was "Haq Ali Ali" which was performed with folk style and traditional instruments. He sang for many pakistani movies and also for two bollywood movies "Aur yaar Ho Gayaa" and "Kachche Dhaage" before his death. He also performed the title song of the film "Dhadkan". As well gave background music in many hindi movies. 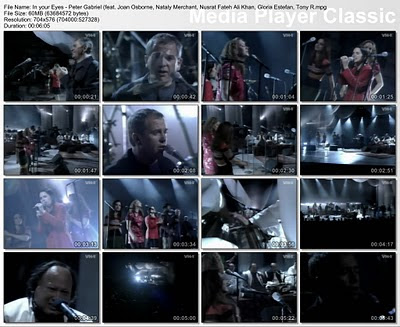 He reached out to Western audiences with a couple of fusion records produced by Canadian guitarist Michael Brook. In 1995, he collaborated with Eddie Vedder on the soundtrack to Dead Man Walking.His contribution to that and several other soundtracks and albums (including The Last Temptation of Christ), as well as his friendship with Peter Gabriel,helped to increase his popularity in Europe and the United States. Peter Gabriel's Real World label released five albums of Nusrat's traditional Qawwali performances in the West. He also performed traditional Qawwali live to Western audiences at several WOMAD world music festivals.Nusrat Fateh Ali Khan went to London and his first british performance was organised by "Oriental Star Agencies " in Brimingham.

Dr.Hiromi Lorraine Sakata with Nusrat Fateh Ali Khan during his residency in the University of Washington Ethnomusicology Program, 1992-93.

His name is among the Guinness Book of World Records as a Qawwali artist. Nusrat died in London with kidney and lever failure on Saturday, August 16th, 1997.

Some of the top hits of Nusrat Fateh Ali Khan are:-


All eyes waiting for You Nusrat..., Now It is very hard spend time without You...